Re-posting to show my support to the wonderful Chrissie Swan.

Yes people…  She is human!

All the best Chrissie

I have a girl crush on Chrissie Swan, so at the risk of sounding stalkeresque, unstable or both, I’ll try to explain.

Maybe girl crush is the wrong choice of words. I have a deep affection for her.  An admiration. When Chrissie talks, along with thousands of others, I listen.

The Teacher in me has created this simple flow chart detailing all the reasons for said girl crush: 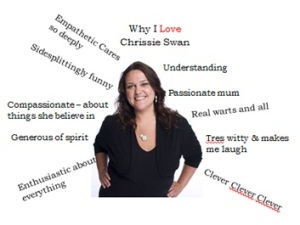 I’m not on TV or radio but (and here’s my long bow), I am a mum, wife and writer so I feel as though I share an affinity with her.

Mother, Wife, TV and Radio Presenter, Writer.  A busy, everyone-wants-a-piece-of-her woman.  To use a cliché, I don’t know how she does it.  Or at least I didn’t know, until I read this article.

I laughed when reading Having it All, but I shed a little tear too.  It was a strange comfort to realise that someone like Chrissie has the same daily dramas as me.  And it was a breath of fresh air to read what she shared about her life.

Here’s an excerpt.  And my reaction too.

My alarm goes off at 4.45am. I sneak out of the marital bed and get dressed in the kitchen because everyone is still asleep. I lay my clothes out the night before and sometimes forget my shoes or undergarments, so at least once a week I turn up to the studio with no shoes/a floppy maternity bra/no undies

I hear you Chrissie!   I’m tiptoeing down the stairs of death, (they’re deathly steep), at 5.45am to shower.  While trying to rouse myself from slumber, I’m thinking about what I have in my limited, ill-fitting wardrobe that will conceal my butt and gut on this God-given day.

I could probably get up a bit earlier and run a straightener over my hair, but I opt for the extra 15 minutes sleep. The drawback of this is that I spend the majority of my day looking like an escapee from an asylum.

I always forget to make sure there are enough bananas. We run out of them – often. And they’re the only fruit my one-year-old will eat.

The only fruit I bother to buy is bananas.  Not lying. Other fruits are either ordered at day care or provided by my dear Mother-in-law when my kids see her.

Last week, I put my three-year-old to bed and quickly read him a story. I confess I skipped every second page and invented The End when I felt like it.

When exhausted, I summon my most animated voice and tell Little Man this: “Sleep right away because tomorrow is going to be so exciting you’ll need all your rest and energy!”

Weet-Bix and blueberries can double as dinner.

I just measured a hair on my leg and it came in at an impressive 1.2 centimetres. Clearly, I need a Post-it note in the bathroom that says “shave”.

In the winter months I’ve been known to visit random waxing salons in faraway suburbs. I don’t care that they converse in a foreign language, even though I’m convinced they’re saying, “Get a load of this hairy bitch!”

Last week my gas was nearly cut off because I forgot to pay the bill. I had to call them and beg for an extension, spurred on by visions of my children in layers of clothing huddled around the cat for warmth.

I moved house a few months ago and forgot to cancel the electricity. Now I have to pay bills for both old and new homes.  Apparently there is no recourse for stupidity.

I made a terrible waldorf salad and chicken spare ribs for dinner and I couldn’t even talk about how foul it was. Later that night, I heard my partner stirring up a glass of Fybogel to make up for the distinct lack of edible anything in the meal department.

When I read this I had a revelation.  My man goes through Mylanta like they’re lollies. They’re permanently on the fridge. Fark!

The “service me NOW” light has been on in my car for about four months – but, seriously, how can I survive without the car for two days? I will probably drive it until it explodes. And work it out then.

Same here!  Well different really but car issue all the same.  I’m so terrified about my Crapastra dying that I service it ALL THE TIME.  I won’t drive it at the weekend and insist on using it only for short trips.  The Crapastra has given me OCD but I can’t afford to replace it at this point.

My three-year-old knows 15 types of dinosaur and I have no idea who taught him. Where have I been?

This candid honesty is what I adore about Chrissie.  She’s not afraid to admit defeat, admit the eff ups, admit the unfortunate, raw, embarrassing truths that so many of us Mums pretend do not exist.  I love her for this! And I wish to goodness that more well-known Australian women would bite the bullet, stop glossing over the fucking truth and call a spade a spade.

So as new as it is, I’ve committed to a blog of candid honesty and embarrassing truths.  I will not succumb to a Sham blog.

No make-believe or gloss.

So that’s me for this Post.  If you are yet to meet Ms Chrissie Swan, grab Google, a coffee and acquaint yourself.

She really is one of the most inspiring women of our generation.

I blog after my kids go to sleep. It takes a while. END_OF_DOCUMENT_TOKEN_TO_BE_REPLACED
This entry was posted on Friday, October 26th, 2012 at 20:51 and tagged with The Kitchen You can follow any responses to this entry through the RSS 2.0 feed.
« The Very First Post
Happy and Silly »

16 responses to “I Heart Chrissie Swan”